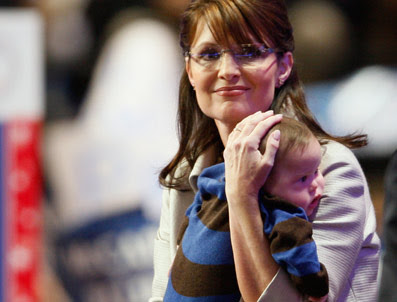 image from iOwnTheWorld
In the 38 years since Roe V. Wade was passed, 50,000,000 babies have been murdered. The brilliant Mark Steyn calls it Big Government Back Alley.
* * *
50 million. Ummm, that is a helluva lot of souls sucked out of the safety of a womb...
* * *
Lloyd Marcus reminds us of the dirtly little secret which I posted about before: "Black women abort their children at 3 times the rate of white women. Over 50% of black pregnancies end in abortion. Thus, according to the numbers, abortion in America is racist. This black genocide is so severe, black babies could be classified as an endangered species due to abortion.

And yet, abortion obsessed liberal Democrats are praised as champions of black America. Meanwhile, MLK's niece, Dr Alveda King who has committed her life to ending the genocide of black babies is vilified, called a 'traitor to her race" and a "sellout" because she is a black Republican.

I feel like I am living in Bizarro World. Enemies of black America are promoted as heroes; true friends are trashed."
* * *
Pro-life Sarah Palin had the COURAGE to give birth to a Down's Syndrome baby. If you knew you were giving birth to a defective baby, would you go through with it? Think about the courage that would take.. I don't know if I could do it. It takes a lot of courage, strength just to raise a normal child let alone one that has any type of genetic defect.
* * *
Sarah Palin would make a great POTUS because she is pro-life.
Isn't there is enough death in the USA and the world? There is and there is PLENTY of room for more people... If EVERY single person was put in ONE location on the planet, the entire population would fit in the state of Texas. Visualize it... There IS more room!
Choose Life.
Adoption.Not.Abortion.
In May-Jun 2008 Governor Palin accomplished: 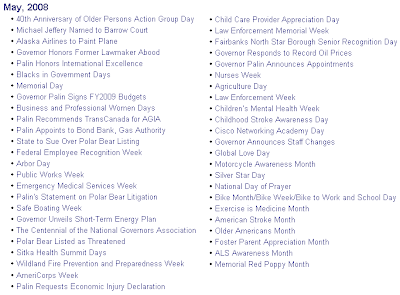 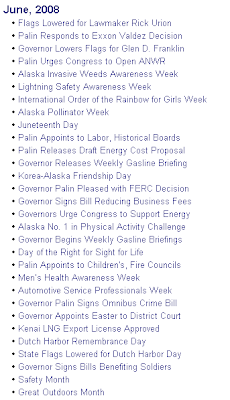