I'm sure Rahm will cure all Chicago's ills, right? "If Chicago's West and South sides were their own cities,
they'd be the deadliest and most violent in America"
Oh... Chicago... I weep for your continued slow demise... thank god I grew up in Wilmette...
Exactly how TheWon and Queen Antoinette Meechelle are solving all of America's problems by spending the nation into growing debt and dark oblivion, I venture an educated guess Mr. Rahm, the new selected Mayor of Chicago, will be super dooper GREAT for the city and solve ALL of their nagging wee problems - in probably the same manner... Never let a crisis go to waste!

Gird your loins Chicago residents... for large tax hikes in your future!

I chalk up the ongoing "progress" (?) in Chicago to the blind, leftist media and rampant, continued corruption. Al Capone got 'nuttin on the current Chicago gangsters...
Michelle Malkin points out a few statistics:

(is she being slightly sarcastic in her well wishes to Rahm, what do you reckon?...)

"Chicago is a one party dictatorship as there were no serious Republican challengers. There never are. The Chicago Machine's minions make sure of that. Tactics ranging from physical intimidation to legal skullduggery keep the city safely in the hands of the crooks who milk the taxpayer until they scream for mercy - and then milk them some more.

Emanuel was not very specific in his program for the city. He didn't have to be. He got the blessing of Godfather Daley (behind the scenes) and his Patrone Barack Obama. As usual, the reformers were disorganized, listless, and fought among themselves regarding which candidate to back. Not that it would have mattered. Loyal alderman were standing by to make sure that the "right" election outcome ensued.

A recent Wall Street Journal article highlighted the Census Bureau's finding that the population of the city of Chicago has sunk to levels not seen since 1920. Sky high taxes, crime ridden wards, and an unfriendly business climate have all combined to drive jobs away from the city, along with people. If this keeps up for another decade, the Windy City will begin to resemble the Motor City.

A testament to what power and greed can do to a great city." 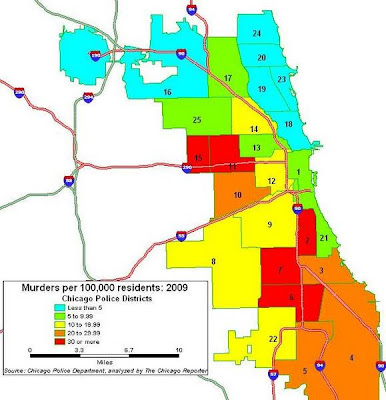