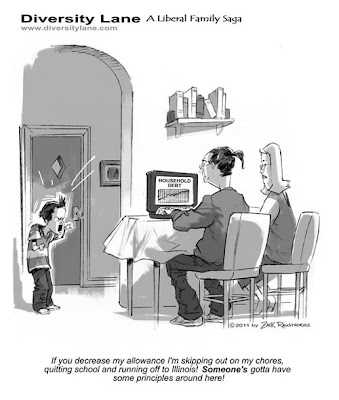 image from Moonbattery
Do you fully understand the rabid, illogical craziness of people protesting in the streets... in...
Wisconsin... ? (thought I'd say middle east, didn't ya)

I've found some good answers at Real Clear Politics. On 27-Feb-11 Robert Tracinski figured out their motivation. Check out his article Public Unions & the Socialist Utopia. Mr. Tracincski says the voracious protests are because:

"It is a matter of survival for Democrats in an immediate, practical sense. As Michael Barone explains, the government employees' unions are a mechanism for siphoning taxpayer dollars into the campaigns of Democratic politicians.

But there is something deeper here than just favor-selling and vote-buying. There is something that almost amounts to a twisted idealism in the Democrats' crusade. They are fighting, not just to preserve their special privileges, but to preserve a social ideal. Or rather, they are fighting to maintain the illusion that their ideal system is benevolent and sustainable."

What does that mean?

"In short, public employment is an idealized socialist economy in miniature, including its political aspect: the grateful recipients of government largesse provide money and organizational support to re-elect the politicians who shower them with all of these benefits.

Put it all together, and you have the Democrats' version of utopia. In the larger American culture of Tea Parties, bond vigilantes, and rugged individualists, Democrats feel they are constantly on the defensive. But within the little subculture of unionized government employees, all is right with the world, and everything seems to work the way it is supposed to.

This cozy little world has been described as a system that grants special privileges to a few, which is particularly rankling in the current stagnant economy, when private sector workers acutely feel the difference. But I think this misses the point. The point is that this is how the left thinks everyone should live and work. It is their version of a model society.

Every political movement needs models. It needs a real-world example to demonstrate how its ideal works and that it works.

And there's the rub. The left is running low on utopias.

The failure of Communism-and the spectacular success of capitalism, particularly in bringing wealth to what used to be called the "Third World"-deprived the left of one utopia. So they fell back on the European welfare state, smugly assuring Americans that we would be so much better off if we were more like our cousins across the Atlantic. But the Great Recession has triggered a sovereign debt crisis across Europe. It turned out that the continent's welfare states were borrowing money to paper over the fact that they have committed themselves to benefits more generous than they can ever hope to pay for."

DING DING DING DING DINNNNNG!
A HA!! The public sector unions is a mini Democratic utopia!
Good spotting Mr. Tracinski. And about the money involved? On 24-Feb-11, Michael Barone explains this in Who Benefits From Government Unions?:

Follow the money, Washington reporters like to say. The money in this case comes from taxpayers, present and future, who are the source of every penny of dues paid to public employee unions, who in turn spend much of that money on politics, almost all of it for Democrats. In effect, public employee unions are a mechanism by which every taxpayer is forced to fund the Democratic Party."

Bloody hell... these public sector unions MUST END...
Posted by Lisa G in NZ at 9:51 PM