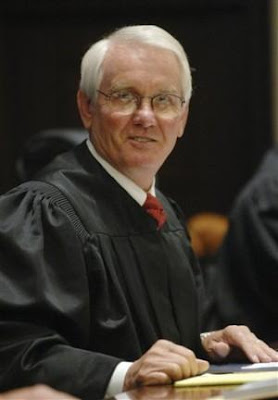 "MIAMI (Reuters) - A federal judge in Florida struck down President Barack Obama's landmark healthcare overhaul as unconstitutional on Monday in the biggest legal challenge yet to federal authority to enact the law.

"Because the individual mandate is unconstitutional and not severable, the entire act must be declared void," he wrote ..."

WOW... ! Did this judge just save America from the communist-socialist-marxist regime's attempted take over of 1/6th of the American economy?

"...he went through all of the relevant case law at length before concluding that the mandate violated the Commerce Clause. He correctly observed that “it would be a radical departure from existing case law to hold that Congress can regulate inactivity under the Commerce Clause.” He then concluded that “the individual mandate and the remaining provisions are all inextricably bound together in purpose and must stand or fall as a single unit. The individual mandate cannot be severed.” As such, he appropriately struck down the entire law. Today’s decision should be a major source of concern for the Obama administration for at least five reasons.

First, the parties involved. This case involves a majority of the states (26)

Second, the case creates a very bad trend for the administration.

Third, the case strikes down the whole of Obamacare based on the unconstitutionality of the mandate.

The fourth problem for the Obama DOJ: Judge Vinson’s decision is thorough, well-reasoned, and likely will be very persuasive to appellate judges, and eventually Justices, who review the case.

The fifth problem, the Judge granted declaratory relief to the parties, which includes 26 states. "

Wright at AT says this ruling also smacks down crony capitalists:

"These deals with the Devil are all over the place, thanks to this administration. We have the Chevy Volt. We have Archer Daniels Midland and the entire ethanol scam. And we have global warming crony capitalists like Jeff Immelt of GE all over the place. None of these products -- the Volt, ethanol, windmills -- can survive the genius of the free market. None of them entices the real entrepreneur producer because none of them has a willing customer base.

And yet crony capitalists are getting rich off all of these failing products every day because government is perverting the market with mandates and subsidies and regulations that strangle legitimate decisions about allocation of capital, production, and purchasing. Crony capitalism is the ultimate insiders' game of government-anointed winners and losers. And the biggest loser of all is the economic system that made America what it is."

... well TheUrkel had his "picture" WITH RONALD REAGAN recently on the cover of Time Magazine... so he'll just LOVE the irony a Reagan appointed judge has saved America!

From Rush: "I think, folks, that we should proudly play up the fact that Judge Vinson is a Reagan nominee. The left now loves Reagan. They've been invoking Reagan since the buildup to Obama's State of the Union show. "He's Reaganesque! He's been reading all about Reagan! He tried to sound Reaganesque on the economy in the State of the Union show." Obama loves Reagan now. So I assume that Obama would love the judges that Reagan appointed. Vaughn Walker, the judge in San Francisco who ruled for same-sex marriage, was also appointed by Reagan; they love him. Sandra Day O'Connor was appointed to the US Supreme Court by Reagan; they love her.

I would assume if they're going to be consistent, that they will looove Judge Vinson. I think also... Didn't this regime ignore a law regarding Arizona during the Arizona illegal immigrant law? I have to double-check that. But I think it's good. We should encourage the State-Controlled Media to identify who appointed this judge, because not only was this judge's decision brilliant and courageous, most people agree with it. We should be shouting this from the rooftops. Two-thirds of the American people don't want Obamacare. Two-thirds want it repealed. Here comes a judge who is on the side all of significant majority. Proudly proclaim his name: Judge Vinson! Proudly proclaim who nominated him: Ronald Reagan!"

I'm doing a happy dance this week... this ruling CANNOT just be ignored. O-scare CANNOT proceed. IT IS VOID.

A HUGE THANK YOU to brilliant American hero Judge Vinson!
Posted by Lisa G in NZ at 12:58 PM