Stein: I can't believe I'm sitting next to a Republican 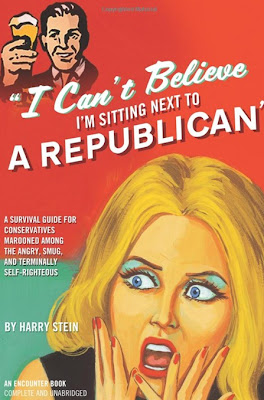 I can't believe I'm sitting next to a Republican!

"When you're talking liberalism, you may be talking many things - self-righteousness, good intentions as an end in themselves, obliviousness to consequences - but logic is not one of them. Liberals feel what they feel, when they feel it, and what they fell at any given moment is what they know.

This is why anyone who believes that a liberal can be straightened out if only reality is explained to him, simply and clearly, is doomed to fail."

The author provides a few examples of "disasters liberalism has visited upon American culture in recent decades":

Last year, another American started at my workplace. I assumed they would be on the left. A brief political discussion was had within earshot of this person who, with wide eyes, shock and alarm asked me "Are you a Republican?!..." to which I replied "I'm an independent". Blink. Blink. Blink... and no response.

I decided I won't discuss politics with this American... unless I hear lies I have to jump in and correct with facts. I'll do that. I've tried this, however, with a Canadian co-worker who has lived in NZ for over 20 years. The Canadian fancies himself an expert on America. The only thing he's an expert on is leftist media talking points. Yep, he's got those perfected quite well. Last time we had a brief discussion about something American, I said "you're view is held by 20% of America... but you are not an American so don't try to be an expert at all things American... and I won't pretend to be an expert on Canada..." We haven't discussed anything political since.

The Canadian has bought the man-made global warming lies a la Gore-acle for the last 10 years. I sent him a few facts since this has been debunked last year as a globalist lie to control populations with taxation. He hasn't changed his mind... I don't think he's realized he's been propagandized. He says he "just knows" planetary warming is due to man's CO2... However, this week I overheard him say "people will believe stuff because they want to ... like a religion" and I almost yelled across the office "you mean like the MAN made global WARMING LIE?!..." but I stopped myself. I think everyone in the office would probably look at me like I'm an alien from mars. Many in NZ has bought the warming lies... their government has bought it, too - following the UN line... and has started taxing the population via an ETS tax.

There are a lot of sheep in NZ.

So I am an office lurker, ready with facts, and will inject them into leftist conversational lies - if it can be done in a nice way... The left "feel" their opinions are "true" even if factually incorrect.