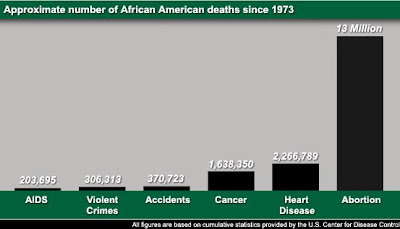 Wow... 1,876 deaths every day? That is a damn frightening statistic.

Gateway pundit was talking about a "rebuttal" (pro-abortion) ad to the pro-life ad which will air on CBS for the super bowl. A pro-life position has the progressive lefty dems all in fits and rages. Being pro-life, you see, is against their agenda.

I've read a bit here and there about black conservative activists being concerned about black abortion. They SHOULD be concerned!
GW pundit had this link, so I went to read up about the very sad facts from BlackGenocide.org:

Minority women constitute only about 13% of the female population (age 15-44) in the United States, but they underwent approximately 36% of the abortions.

According to the Alan Guttmacher Institute, black women are more than 5 times as likely as white women to have an abortion

On average, 1,876 black babies are aborted every day in the United States.

This incidence of abortion has resulted in a tremendous loss of life. It has been estimated that since 1973 Black women have had about 16 million abortions. Michael Novak had calculated "Since the number of current living Blacks (in the U.S.) is 36 million, the missing 16 million represents an enormous loss, for without abortion, America's Black community would now number 52 million persons. It would be 36 percent larger than it is. Abortion has swept through the Black community like a scythe, cutting down every fourth member."
= = =
here is a question: why can't we just be pro-adoption instead of pro-abortion?
Bring back shame.
But, hand out birth control with parental consent.
Promote abstinence before marriage
When there are unwanted children: give them up for adoption.
... seems like a better idea than killing
... just my opinion of course
Posted by Lisa G in NZ at 4:44 PM