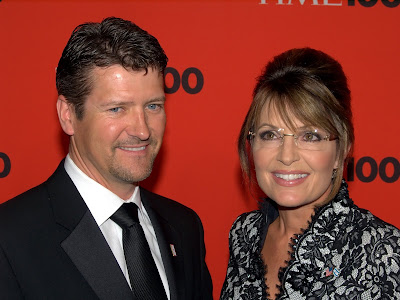 Can I just say that Todd Palin is quite handsome? OK, just wanted to point out the obvious. The Palins make such a cute couple. They support each other and are very pro small business. From Conservatives 4 Palin:

"At a time when so many Americans simply want to get back to work, Sarah and Todd Palin’s working-class background might prove a welcome contrast to the Ivy-League-attorney-power couples and bluebloods who have graced the White House in recent years. Uniquely attuned to the concerns of the hardworking little guy, the Palins don’t just pay lip service to working families: they are a working family. Indeed, Todd Palin, the former “First Dude” of Alaska, is proudly blue collar – a member of the International Brotherhood of Electrical Workers and United Steelworkers unions. Perhaps unlike any first spouse before him, Todd’s life work requires him to get his hands dirty, really dirty, both as a commercial fisherman in summers on Bristol Bay and also as a former oil-field production operator on Alaska’s remote North Slope.

Todd Palin roared into my life in a 1972 Ford Mustang. Handsome and independent, he was part Yupik Eskimo. … He didn’t come from a wealthy family but from a very hardworking family. […] As a blue-collar union hand, a production operator wearing a hard hat and steel-toed boots, Todd wasn’t calling the shots for the [BP] corporate bosses in London. In fact, I told Alaskans, “Todd’s not in management. He actually works.”

Given our need to restore manufacturing jobs in this country, Todd Palin’s experience in an important industry and in North America’s largest industrial union (700,000-plus members) could prove valuable in an advisory capacity. As first gentleman of Alaska, Todd Palin counseled Governor Palin on workforce development issues for the natural gas pipeline she championed. Sarah Palin herself was given honorary membership in the IBEW union as she pursued private-sector energy projects. The overhyped emails released in February of this year, showed Todd Palin providing input to his wife on what you might expect: marine regulation, wildfires, native Alaskan issues, oil shale leasing, and Bureau of Land Management deals. While reporters suggested Todd played an alarmingly large policy role, strangely, no emails ever surfaced showing that he advised the governor on how to ban bake sales at public schools. Apparently, Todd Palin stuck to issues he knew, where he could be of value, and didn’t try to impose half-baked views on others. " (read the rest here)

Sarah Palin would make an excellent POTUS because she has lived, worked in and fully understands the 60-70% of Americans who work and run SMALL BUSINESSES...

I'm going to finish reading "Going Rogue" now... it is a GREAT read. 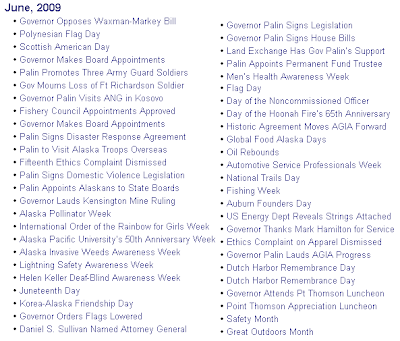