The deliberate alienation of the UK.
The deliberate undermining of Israel.
The dismissal of India.
The abandonment of Africa.
A back of the hand to Central Europe.
The Russian “reset”.
The North African apocalypse.
The demolition of Syria.
The failure to back the “Green Revolution” in Iran.
Refusal to address the Iranian nuclear threat.
The collapse of Iraq.
The China Seas confrontation.
The rape of Ukraine.

..."Looking at the record laid out like this, it’s easy to understand the more hysterical types who insist that it’s all part of a plan, that Obama is a super Bond villain set on bringing Western civilization down in ruins. But in fact, it’s all a result of long-term leftist ideas, chief among them, in the case of foreign policy, that A) the United States is the source of the world’s ills, and B) Remove American influence and the world will soon revert to a humanist, collectivist modus vivendi. "

"(There’s also a third such concept at work in this case as well: the idea that women, with their practicality and compassion, would, once in charge of international relationships, soon put things is order where men have failed for millennia. This is the reason behind Obama’s hiring of Hillary Clinton, an incompetent egomaniac matched only by himself, Susan Rice, who consistently seems lost somewhere between confusion and bewilderment, and Samantha Power, whose “Responsibility to Protect” doctrine strangely disappeared once she needed to defend the Obama administration’s Syria dithering. The results speak for themselves.) "

"That’s the program that Obama has been carrying out. That’s the basis of “leading from behind,” the “reset,” various Springs and Dawns, and the abandonment of the UK, Israel, Poland, the Czech Republic, India, Iraq, and Afghanistan. The outcome has been what any high school history student could have told you: invasion, brutality, and genocide. Throughout history, the only instrument to successfully enforce peace has been the superstate: Persia, Rome, the Ottomans, Britannia, the United States of America. The dominant power must act as the dominant power or as nothing. Obama, lost in his choom gang 1970s daydreams, has made the nihilistic choice, and now millions will pay for it."

"What can be done? Very little, at this point."

I don't think my suggestion of tar and feathers is going to happen.

NEXT potus? Has a HUGE mess to start cleaning up. 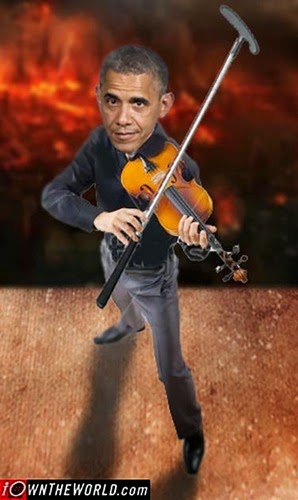 Whittle explains how O and his aren't on the American side