"Based on information provided by my source and corroborated elsewhere, the official account by administration officials is a mosaic of lies that were necessary to cover the unpalatable truth of covert actions taking place in Libya, Syria, Turkey, Jordan and Lebanon. The primary objective of our covert actions was to secretly arm anti-Assad “rebels” in Syria by funnelling arms from Libya to Syria via Turkey, with other destinations that included Jordan and Lebanon. Regarding the threat to Stevens and the other murdered Americans, the truth will reformat the persistent question posed to government officials, from UN Ambassador Susan Rice to White House Spokesman Jay Carney and others from “how could you not have known” to “how could you have done these things?”

First, it is important to understand that Ambassador Stevens, Sean Smith, Glen Dougherty and Tyrone Woods were not killed at a consulate office in Benghazi—as there is not such office there. They died at one of the largest CIA operations centers in the Middle East, which was located in Benghazi and served as the logistics headquarters for arms and weapons being shipped out of the post-Qaddafi Libya."

Gee, you think THIS would have made a DIFFERENCE in the 2012 election.  HEY MITT ROMNEY - coulda, shoulda, woulda - you SHOULD have gotten better intel about Benghazi before nice-guy-approach debates with the protected golfer-in-chief.  Remember the Left insisted/insists THEY had/have decimated al Qaeda?  (yeah nooot so much)

Trey Gowdy vows to find out the truth about Benghazi.  How far will the muslim-enabling O-regime allow this investigation?  Will Mr. Gowdy befall an untimely accident?  The Clintons and all communists like to kill adversaries.  Shhh, don't tell anyone. 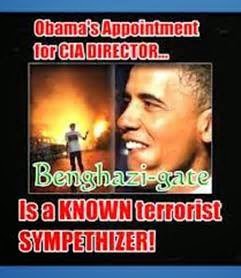