Prager U "Why Trump Won" spot on 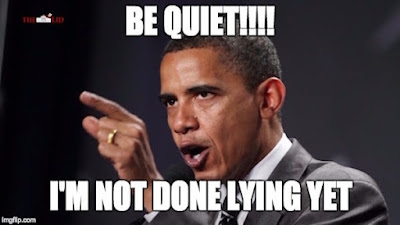 Check out the loooooooooooooooong list of 1063 (and counting?) lies from Obummer...

But the left thinks President Trump lies?  This is because they CANNOT recognize truth any more.

1) Carried out military interventionism in Libya without Congressional approval

In June 2011, U.S. Congressman Dennis Kucinich (D-Ohio) said that Obama had violated the Constitution when he launched military operations in Libya without Congressional approval.

In April 2014, Ralph Nader said that Obama should be impeached for his actions in Libya.

In May 2010, it was reported that the Obama administration had selected KBR, a former subsidiary of Halliburton, for a no-bid contract worth as much as $568 million through 2011, just hours after the Justice Department had said it would pursue a lawsuit accusing the Houston-based company of using kickbacks to get foreign contracts.

Don’t be fooled by the words “former subsidiary.” These are the same Halliburton cronies that Bush gave a no-bid contract to.

3) Has an administration full of lobbyists, after promising he wouldn’t have any

However, by February 2010, he had more than 40 lobbyists working in his administration. A list of them can be seen here.

4) Has close ties to Wall St., but pretends to support Occupy Wall St.

Although Obama claims to support the Occupy Wall St. movement, the truth is that he has raised more money from Wall St. than any other candidate during the last 20 years. In early 2012, Obama held a fundraiser where Wall St. investment bankers and hedge fund managers each paid $35,800 to attend. In October 2011, Obama hired Broderick Johnson, a longtime Wall Street lobbyist, to be his new senior campaign adviser. Johnson had worked as a lobbyist for JP Morgan Chase, Bank of America, Fannie Mae, Comcast, Microsoft, and the oil industry.