Ok, I'm not in shape... I realize middle age rot has set in...  My left knee is now arthritic so often just walking is painful.  However, I'm not writing a book of lies hoping to make more millions from brain dead minions who will gobble up her propaganda bits ....


What AM I on about NOW you ask?

Jeannie DeAngelis has a good summary over at American Thinker. Jeannie's musings made me snort-laugh out loud:

"Becoming is unquestionably an appropriate title for this memoir, because while she was the first lady, Michelle became many things.

Take for instance Michelle becoming a world-class organic gardener, a master of the hula hoop, a connoisseur of haute couture, and a backup dancer for Bruno Mars. During her eight years in office, Michelle was also becoming a dictatorial lunch lady, a pumped-up biceps icon, a jet fuel-guzzling Air Force One traveler, a Hollywood elbow-rubber, a fried fat cake eater, a Target shopper, and an advocate for breastfeeding and bringing home Nigerian girls kidnapped by Boko Haram.

While her husband was "fundamentally transforming" America, Michelle was busily becoming an advocate for redefining marriage and transgender bathrooms and, above all, becoming a public speaker in the style of female members of the old Black Panthers.

Even still, it's hard to fathom that despite being the recipient of untold blessings, Michelle believes that "after eight years of working really hard for this country, there are still people who [don't] see [her] for what [she is] because of [her] skin color." Based on those and similar delusional sentiments, "bitter clinger" Michelle Obama's book Becoming will probably be anything but "inspirational."

Excellent work Jeannie... HA HA HA... hula hooper! (go read the rest) ... Oh, my sides hurt from laughter... and no, I will continue to scoff and ignore ANYTHING the Obama-marxist duo say or do. Too bad they made MILLIONS UPON MILLIONS of taxpayer $$. Sad, really... Disgusting.  Hey Meech and Barry, STFU already... Go away... Sheeeeeesh.....
-----
#BecomingMoreOfaPainInTheArseThanUsual
#BecomingAndRemainingExcellentLiars
#BecomingGreatMarxistPropagandists
----
#ColdAngerRemains
#ThankGodTheyAreOutOfWhiteHouse
#STFU

Are you persuaded to Win Bigly yet?

Well you might want to read Scot Adam's "Win Bigly: Persuasian in a World Where Facts Don't Matter" then.


"According to Adams (and in fact all of the Nobel-winning cognitive science available), humans do not reason from facts to conclusions. We instead hold biased conclusions about the world, and force the facts we observe from the world to conform to this conclusion, or story, or narrative, or movie as Adams calls it. Americans are watching two movies.

Thus if Trump wants to hold a military parade, he’s just like Hitler, or the dictator of North Korea. Or he’s a patriotic American honoring the troops. (A third interpretation, which is too advanced for a country where half of the population is losing its mind on any given day, is that Trump is an amoral actor who knows that Democrats will make the tactical blunder of opposing a military parade, and thus the parade isn’t about Hitler or honor, it’s about winning.)

Half of the country is watching one movie on Trump, based on how they subjectively alter the facts to conform to their conclusion about Trump. The other half of the country is watching a movie where the economy is entering a Golden Age, as the stock market rises, companies invest heavily in America, and our military has tremendous success against ISIS.

In a rational world, people would update their priors about the world. If, for example, you said you opposed Trump because you feared a stock market crash, you’d say, “Huh? Looks like I was wrong. I no longer oppose Trump.” Yet that’s not how humans work. You’ll find a new reason to oppose Trump."

Which "movie" are YOU watching?  I, for one, am VERY happy on a DAILY basis there is NO SUCH thing as a "President Hillary" (USA dodged a HUGE bullet.... Yuuuge...) 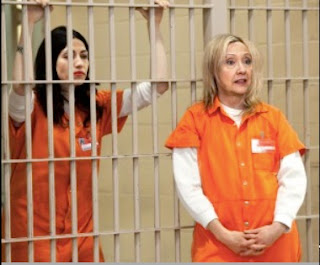 You are itty bitty leftist sheep.

"From sea to shining sea, that sound you are hearing is the collective noise of liberal heads exploding.
Donald Trump wants a military parade. On a "patriotic holiday." And the left is having a collective bowel movement.

The president wants the parade to honor the military and make Americans proud of their country. The reaction to this rather inocuous idea from the left has been entirely predictable." 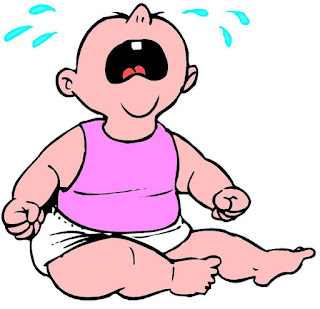 EVERY single day either on NZ public radio, on news sites or television "news": the global warming myth of human activity being responsible for planetary warming (ahem I mean "climate change") is pushed as propaganda.

Today's example from "stuff" says "Climate change: Where in New Zealand could be worst hit?"

From this article "The investigation comes after a Government-commissioned working group found New Zealand lacked a co-ordinated plan to deal with future climate change, despite its risk to hundreds of billions of dollars of property and infrastructure.

It revealed a range of weak spots and knowledge gaps - notably that there was no nationally co-ordinated strategy, and that New Zealand tended to react to events instead of preparing for them.
It found inconsistencies in time frames across legislation affecting adaptation, and some "competing objectives" across legislation and policies, meaning roles could be confused and investing in resources was made challenging. The Government has responded by releasing new guidance setting out a 10-step process for councils and communities, based on the latest science."

Further work on adaptation is under way, and another working group report on how New Zealand can adapt to climate change is due in March."

ATTENTION NZ public:  NZ government has propagandized you with LIES!  NZ will TAX you MORE AND MORE to "fight" this non fight.

MOST of media = fake news

"The media lie has now acquired epic dimensions. Gary Demar puts it succinctly in an article for Godfather Politics: Obviously, much if not most of what we read in articles and screeds written by liberals “is designed to distort the truth. Some are willing to lie for what they perceive to be their idea of the greater good. Others just put the worst spin on out-of-context statements to elevate the blood pressure of their targeted ultra-liberal audience.”

The Fake News Syndrome, as I’ve stressed, is nothing new. It’s been approximately the case for as long as we can remember. The only discrimination between the MSM and the FNM is that the latter has become effectively coterminous with the former. Previously there were a few, if not many, reasonably impartial news venues; today these are practically non-existent.

Eventually, I realized that the Western media were even more insidious than the Soviet controlled news outfits. Many Russians knew that Pravda and Izvestia were propaganda arms of the Politburo and discounted their stories as rubbish; many Westerners, on the other hand, are readily deceived, believing the press is free from bias and generally principled and reliable. I know now, however belatedly, that our media constitute one of the gravest threats to our democratic traditions and wonder how I could ever have been so gullible."

RESEARCH yourself.  Find the truth. 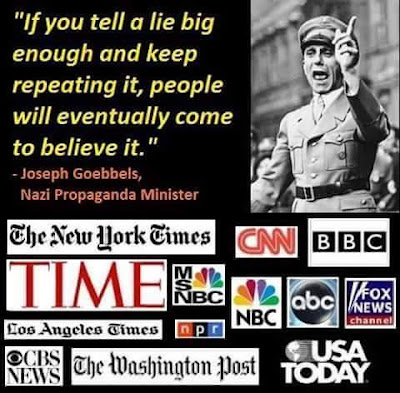 Credit to this guy - see more of his/her stuff on twitter:  twitter.com/som3thingwicked

Janet Levy says "Much of the disagreement over the use of America's natural resources stems from confusion over the difference between conservation and environmentalism.  Conservation, a rational, conservative approach to protecting and preserving the environment, is an ethic of resource utilization.  Conservationists view man as a natural, invested partner in the endeavor to preserve the environment to ensure its continued, sustainable use by humans.

Environmentalism began as a sincere conservationist movement but subscribes to a view of man as nature's enemy.  Nature itself is revered and intrinsically embodied with value.  Environmentalists seek to limit human access to, rather than allow use of, nature to advance human life, health, and happiness.  Environmentalists perceive man as an immoral, destructive interloper who can interact only negatively with his natural surroundings."

"Now a team at Kyoto University has, by rummaging around in piles of waste, found a plastic munching microbe. After five years of searching through 250 samples, they isolated a bacteria that could live on poly(ethylene terephthalate) (PET), a common plastic used in bottles and clothing. They named the new species of bacteria Ideonella sakaiensis.
You may think this is the rerun of an old story, as plastic-eating microbes have already been touted as saviours of the planet. But there are several important differences here.
First, previous reports were of tricky-to-cultivate fungi, where in this case the microbe is easily grown. The researchers more or less left the PET in a warm jar with the bacterial culture and some other nutrients, and a few weeks later all the plastic was gone." 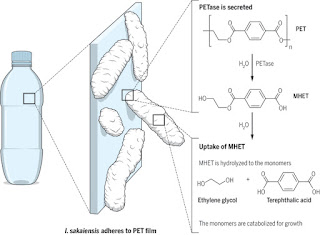