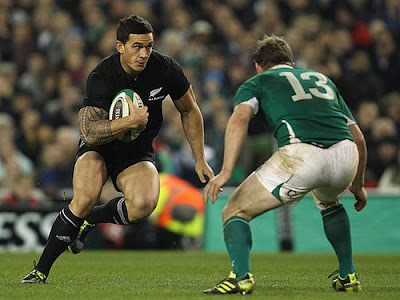 Wow. I used to respect you. Your athletic skills have been interesting to watch as a rugby fan.

I've just learned this week in 2008 you converted to Islam? I presume this must be the influence of "controversial boxing promoter Khoder Nasser"... because otherwise, I just don't understand what the appeal would be to join this horrid, human-rights-bashing "religion".

Was it the fact you are cheerily allowed to beat your wife if she refuses sex?
Perhaps it is a plus that if someone steals from you, if living in a Muslim county under Sharia, you could promote chopping their hand off?
Or, um, another lovely incentive: stoning an infidel to death?
Oh, I've got it! ... at some point, if you want to become a suicide bomber: 72 virgins will be waiting for you in 'heaven'!
Yes! These points must be very attractive features for new joiners into a "religion"!
No?... Islam wants a world wide caliphate - to make EVERYONE follow Islam... by force as necessary... well, gee that just sounds swell, doesn't it?
Don't take my opinion, as previously mentioned,

"From Stop Shariah Now, examples of Shariah Law include the following: (from the authoritative source Reliance of the Traveller, The Sacred Manual of Islamic Law)

1. Requirement of women to obtain permission from husbands for daily freedoms;
2. Beating of disobedient woman and girls;
3. Execution of homosexuals;
4. Engagement of polygamy and forced child marriages;
5. Requirement of the testimony of four male witnesses to prove rape;
6. Stoning of adulteresses;
7. Lashing of adulterers;
8. Amputation of body for criminal offenses;
9. Female genital mutilation;
10. Capital punishment for those who slander or insult Islam;
11. Execution of apostates, or those that leave the religion of Islam
12. Inferior status for all non-Muslims, known as Dhimmitude.
13. Concept of Taquiyya: A Muslim may lie or deceive others to advance the cause of Islam.

Please research your newly adopted "Religion of Peace (and a whole stack of dead bodies". One last lovely fact as discussed by iOwnTheWorld, there have been approximatly 83,000 persons murdered by Islamic terrorists in just the last 8.5 years." How FUN is that?!

You really need some better people around you. My mom stepped in when I was a teenager and hanging around with the wrong people. She was right. Perhaps disassociating with this promoter guy would be a start...
If you understood what Islam is and the world wide suffering it causes, this wouldn't be your "choice". You can be spiritual or believe in God without following Islam or any "religion" for that matter.
And of course you don't want to fulfill the "dumb jock" stereotype, do you?
Well ... oops, probably too late now.
disheartedly,
an ex fan
Posted by Lisa G in NZ at 9:47 AM