U.N. watchdog group "America's Survival" has been researching and investigating UN corruption for 30 years. This group's mission is "to educate the American people and to expose the influence of global institutions, including an International Criminal Court, on their lives." 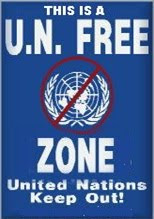 One example: I'm posting one of their recent videos exposing nut ball Alex Jones ('info wars' & 9/11 truther idiot) as an agent provocateur. I'm disappointed to find out Judge Andrew Napolitano has praised Alex Jones but perhaps the Judge just hasn't looked close enough at Mr. Jones. At face value, Jones' stuff seems plausable... until you realize its "all conspiracy all the time" and all the blame (eg 9/11 was inside job by Bush) is on the USA government (or Israel or Britain) as the main evil perpetrator. What? Sorry, Mr. Jones, your anti-American "evidence" doesn't hold up. Suicidal airline bombers or shooters shouting allah akbar is Islamic extremism. Period.

Months ago, I read articles and watched videos by Mr. Jones. Something didn't smell right: my skepticism took hold as I realized he is a dangerous anti-Bush and anti-American lunatic posing as a patriot. Unfortunately, many still believe Mr. Jones' craziness. I have run into these people on blogs like Dr. Kate or CitizenWells where they push 9/11-conspiracy crap: these people drink purple Jones koolaid.

Some evidence from USA Survival news:


Check out other fascinating articles at USA Survival such as:

As with everything in the media and online: be an independent thinker.