IL sliding down the gurgler as Gov hires a kayaking czar 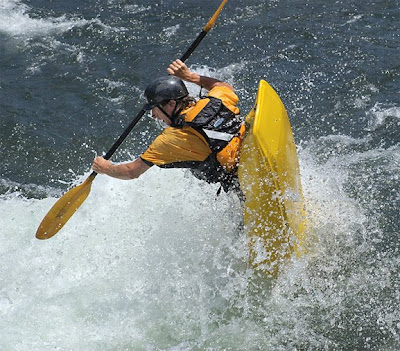 OH OHHHHH spaghettios. Illinois is going broke. What is the Dem governor doing about it? Reforms for FUTURE pension discussed (don't want to get any unions upset, do ya gov)... and hiring a kayaking czar for $85,000 ... hmmm.... (What?!)....
Backyard Conservative notes:
"14-Apr-2010: Illinois can't even pay its current bills, has a $13 billion budget deficit, and while the governor is signing a pension reform bill today it doesn't begin to address the current obligations--unfunded to the tune of $83 billion."
The Free Enterprise Nation.org asks "How can the 5th largest state in the US be facing bankruptcy?":

"In the midst of the recession in fiscal year 2009, while many of the working class were losing their jobs, $101,500 of your taxpayer dollars were spent on the Chicago International Film Festival. This included $10,000 for the participation of some of the state’s political elite in a Dark Knight Gala, which honored the director of the latest Batman films."

"Issue Synopsis
The state of Illinois is on the brink of complete financial disaster. Poor fiscal choices have led down a perilous slope of compounding debts and deficits. Illinois is now threatened by an immense embodiment of red ink which currently stands at approximately $116 billion in state debt and unfunded liabilities!1 Meanwhile, generous pension payments and salaries to state employees have never been more common. Mismanagement of the public sector translates to trouble for the private sector and free enterprise. This is a spotlight on the demise of the once-stable state of Illinois.

Spotlight Focus Points
Is “bankruptcy” looming for Illinois?Illinois is leaning over a precipitous cliff of insolvency. The fiscal crisis is dangerously close to the point of no return, ultimately culminating in bankruptcy, according to the president of the Civic Federation, a fiscal watchdog group based in Chicago. The state already meets the classic definitions of insolvency, which is when your liabilities are far larger than your assets. Illinois is not bringing in enough revenue to pay the bills, and most private companies in this situation would shut down or file for bankruptcy. Legally, however, states may not file for bankruptcy, and Federal bankruptcy code protections are valid for cities and counties but not states. Despite this precarious fiscal environment, state officials have procrastinated and have not displayed the political clout required for tough decisions, such as raising taxes or cutting spending sufficiently enough to begin closing the tremendous estimated $5.7 billion budget shortfall for 2010.2The economic collapse of Illinois may be right around the corner without an unlikely sharp economic upturn or quick decisive corrective action. A downward spiral may be inevitable, as unpaid vendors stop bidding on state contracts, worried investors refuse to buy Illinois bonds, and state employees may get paid in scrip, as California resorted to in 2008. From July to December, 2009, state sales tax receipts were almost $1 billion lower than in 2008, including a $460 million plunge in sales tax and a $349 million decline in personal income taxes. In 2009, the federal government provided 22% more money than usual, mostly from the stimulus program, and total state revenues were still down 2.1%, or $284 million, from 2008. A recent report from the Illinois comptroller states that ‘new’ spending was down almost 2% in the six months ended in December, but ‘actual’ spending was UP 2.2%. So despite a looming threat of bankruptcy, state officials still have not successfully curbed spending." See PDF of full report here.

"The fact that a Democratic legislature pushed through a pension reform bill and a Democratic governor is expected to sign it shows the level of public discontent with lavish public pensions. On a recent budget "teletownhall" held by the Illinois Policy Institute, 3 out of 4 questions from listeners had to do with right-sizing pensions. This may be the start of a national backlash against runaway public employee pensions."

The IL Policy Institute has some 2010 suggestions of economic reform ... I wonder if anyone will listen:

Illinois is in a fiscal meltdown that continues to spiral out of control. We began the year with $4 billion in leftover unpaid bills, and we are likely to end the year with nearly $6 billion. This financial mess could have been avoided if reasonable spending and regulatory reforms had been put into place a year ago.

The Illinois Policy Institute has outlined a series of reforms focused on bringing jobs, responsible spending, and accountable government back to Illinois. The Economic Reform Agenda addresses some of the root causes of Illinois’s financial problems, and consists of six common-sense reforms:

Illinois has a spending problem, not a revenue problem—and its current way of doing business is unsustainable. This six-point agenda includes nonpartisan, common-sense proposals to help spur job creation, inject transparency into the budget process, create more openness to the legislative process, implement reasonable guidelines to control spending, provide for a top-to-bottom review to eliminate duplicative and wasteful spending, and require a supermajority to raise taxes.

These reforms alone will not solve our fiscal mess, but they are important first steps. Illinois needs better government accountability and policies that address the concerns of families, small businesses, and taxpayers. Without true government reform, businesses will not thrive, families will continue to leave Illinois, and the state’s poor and disadvantaged will not get the help they need. The Economic Reform agenda offers proactive, sensible first steps to addressing our state’s problems and getting Illinois back on track. "