We remember & thank all ANZACs especially those lost at Gallipoli, Turkey in 1915. 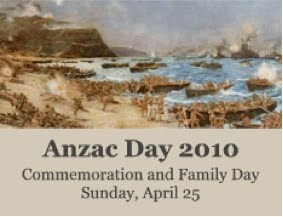 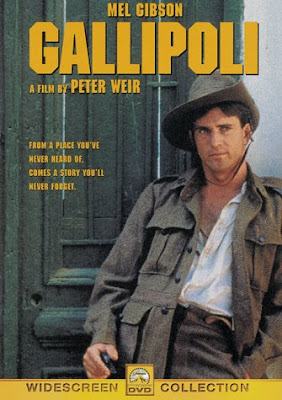 Gallipoli
The 1981 movie Mel Gibon starred in is still used as a learning guide. The film "shows the ill-fated attack on the Turk lines at Gallipoli by soldiers of ANZAC (Australian and New Zealand Army Corps) during the First World War.

In war the lives of soldiers are often lost due to mistaken tactics, stupidity, and bad luck. Gallipoli shows a cardinal example of this phenomenon. Other themes are the pressure of the rush to enlist, friendship among soldiers, and their courage in the face of sure and imminent death. The movie will introduce children to the roles that Australia and Turkey played in the First World War, trench warfare, and the failed Gallipoli campaign."
* * * *
Peter Jackson has created this restored footage from the battle at Gallipoli:

More information about the Gallipoli campaign here from the Returned Servicemen' Association (RSA).

From NZ history online: "Thousands lost their lives in the Gallipoli campaign: 87,000 Turks, 44,000 men from France and the British Empire, including 8500 Australians. To this day, Australia also marks the events of 25 April. Among the dead were 2721 New Zealanders, almost one in four of those who served on Gallipoli.

It may have led to a military defeat, but for many New Zealanders then and since, the Gallipoli landings meant the beginning of something else – a feeling that New Zealand had a role as a distinct nation, even as it fought on the other side of the world in the name of the British Empire."
Posted by Lisa G in NZ at 1:36 PM