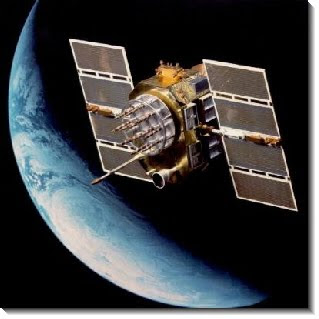 I denounce and reject "earth day".

My husband & I are tidy, don't over-use water or electricity. We both work, 5 days of every 7. We both believe in freedom. We pay (probably too much in) tax. We help our neighbors. We love our pets. We are kind, loving, generous, friendly people.

Let me repeat. The earth is a tough, mother f*er.

Earth is a big, beautiful, kick a&& planet with lots of HUGE hidden forces. Gravity, volcanic activity, tides influenced by the moon's orbit, warming and cooling naturally because of sun spots and gamma waves and such. We live here and take good enough care of earth. No need to 'worship' her: respect, basic care and kindness is enough.

Good article at CFP today "The Naked Communism of Earth Day" mentions: "Environmentalism has been built on the foundation laid by communism because both exist to control everyone’s life. They are opposite sides of the same coin, both are opposed to the ownership of private property and both regard man as state property to be drained of his earnings through taxation.

Environmentalism’s preferred method is coercion and the mechanism for this is government. "

CFP goes on to say the culmination of this crap is the "Greatest hoax of the modern era, “global warming.”

In the name of the environment, the U.S. government is set to impose a Cap-and-Trade law on Americans that has no basis whatever in science and is, in fact, based on the greatest hoax of the modern era, “global warming.”

Cap-and-Trade will tax energy use and directly control how much energy individual Americans can use to heat or cool their homes through “smart grid” technology controlled by the utilities, not the consumer.

Environmentalism is the reason the U.S. has not had a single new refinery or nuclear plant built since the 1970s. Think about that every time you drive your car or turn on the lights.

Just as communism failed the former Soviet Union and just as Red China abandoned communism as the model for its economy, environmentalism continues its relentless quest to deter economic growth and security in America. It is the infrastructure of a New World Order."

Geez, even Disney is indoctrinating your kids with this shite: see a warning by Phelim McAleer at BigHollywood. He warns "Banning fossil fuels or pushing recycling or opposing dams or mining projects are deeply, deeply political actions. They damage communities, they chase jobs out of the country and they tell people where and when they can work and even if they can keep their jobs. When the likes of James Cameron flies to an impoverished region to stop a dam, he may feel good about himself but this means many people will suffer without clean water or cheap electricity. Environmentalism is politics at its most basic."

I love running water, TV, electricity, modern conveniences, driving in my car, living in a nice home and using a computer. Drill here, drill now, baby. Mine away - responsibly of course. Use the earth's resources wisely, but YES, use them!

I will keep my lights a few extra hours and recycle a few less things today as I wholly reject the nonsense which is 'earth day' and instead choose to marvel at man's technological achievements. I celebrate science, music, computers, modern appliances, airplanes, satellites, space travel, laser guided missiles, DNA and forensic testing, quantam physics, nuclear fision, comedy, automobiles, art, medicine and all man's many achievements in the few thousand years here on earth. Now THAT is something to celebrate! THAT is the miracle! Mankind rocks!
By the way, if you reallllllly think u are a true 'greenie'? Do the research: we should ALL have nuclear energy plants and drive nuclear cars.
Go smoke that in your peace pipe.
Posted by Lisa G in NZ at 5:14 PM