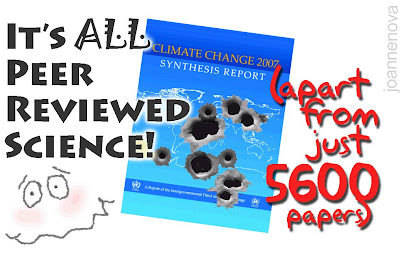 Latest from JoNova "The IPCC, 5,600 white lies" asks "How many times do we need to show the IPCC are incompetent and dishonest?" and "What matters here is not that the IPCC only have 70% of their references “peer reviewed”. What matters is that they have been exposed as fakers. They lied. They poured scorn on anyone who put forward arguments, no matter how strong, that had not jumped through the rigged, bureaucratic hurdle known as peer review."

TORONTO -- 21 of 44 chapters in the United Nations' Nobel-winning climate bible earned an F on a report card released today. Forty citizen auditors from 12 countries examined 18,500 sources cited in the report – finding 5,600 to be not peer-reviewed. 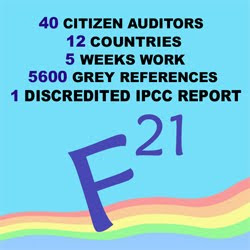 More about "WHY THESE FINDINGS MATTER - Governments around the world need to base their policies on impeccable research - not a report that relies on 5,587 instances of grey literature to make its case."
Donna Framboise (who created the "no consenus.org" site) advises:
"Rajendra Pachauri, the chairman of the IPCC, has spent years telling anyone who'll listen that this report is based only and solely on peer-reviewed literature. Important, influential organizations such as the US Environmental Protection Agency have deflected criticism of their own positions by pointing to the climate bible and to Pachauri's insistence that it "relies entirely on peer reviewed literature in carrying out its assessment."

The myth has been disseminated most effectively, however, by the media. Some of the most reputable outlets imaginable have told their readers and viewers over and over again that the climate bible should be trusted because it is based 100 percent on peer-reviewed scientific literature.

The citizen audit report I released yesterday puts this myth to rest. More than 5,000 of the sources cited in the climate bible are not peer-reviewed. Many turn out to be press releases, discussion papers, and working papers. These are all informal documents, whose veracity has not been tested. In numerous cases, they were produced by advocacy groups - or by political and bureaucratic bodies with their own agendas."
"Climate Quotes" suggests "This audit has dealt the final blow to the claim that the IPCC relies solely on peer-reviewed literature."
Tom Nelson's blog led me to read about the U.S. biofuel scam at MasterSource. Why a scam? Bad economics, environmental waste and bad prospects.
Even the left leaning UK site 'the Guardian' had reported in July 2008: The biofuel has caused a food crisis known since July 2008 "Biofuels have forced global food prices up by 75% - far more than previously estimated - according to a confidential World Bank report obtained by the Guardian."

Master Source's Conclusion "Agriculture faces many difficulties, from how to establish land rights to how to disseminate technology or adapt to climate change. But the biofuel problem is a no-brainer.

Creating an artificial market with subsidies is no way to reduce emissions, save rainforests or feed the poor. Biofuel subsidies are just a Green handout to farm lobbies in rich countries: it is time to end them."
HEY WORLD, R U LISTENING? Evidence shows (time and time again) the IPCC and the UN are LIARS ... so what u gonna do about it?
Posted by Lisa G in NZ at 12:50 PM