Just a herd of cats to round up - goings on, comments and what the new Arizona state law ACTUALLY says about illegal aliens... Dems are waaaaaaay off base on this one (of course)...

Pix from Woody's Place (hat tip Andy at Andy's Redneck Remblings)
Michelle Malkin's comments on why Mexican's leave their home: Could be because Mexico is a police state? (hey... she is on to something!)

I've mentioned what happens with illegals in America vs couple other coutries this week: they get free, awesome and great stuff ! America needs to remove the INCENTIVES for them to come into America. (Why don't people get this?)

From Kevin J. (who completely gets it) at TheBlacksphere.net:

"Mexicans are flooding into America, because their country can’t provide opportunity. Why remain in Mexico working for a living, when you can come to the U.S. and get free housing, a food credit card, a cell phone, a car, and have access to the best medical system in the world…at least for now.

Would anybody in their right mind want to immigrate to Mexico for their definition of “opportunity?” They have no jobs, abject poverty, drug lords, a government more corrupt than our own Congressional Black Caucus! No wonder Mexicans are saying “Hasta la vista, Baby!” And so is about every other immigrant population.

Mexicans could head south into South and Central America. But they don’t. They come to America. South and Central Americans march right through Mexico to immigrate, usually illegally into the U.S. You’d think that a few of them would stop along the way and say, “You know, I think I will stay in Mexico City or Acapulco…it’s not so bad here!” But they do not! They continue marching towards the “tyranny of the U.S.”

It is this illegal influx that has caused American citizens to say enough is enough. This issue is about enforcing America’s laws, and not allowing the false issue of “foreigners doing jobs Americans don’t want” rule the day."

And about the new Arizona law: the Washington Examiner says its a carefully crafted bill and "The bottom line is, it's a good law, sensibly written and rigorously focused -- no matter what the critics say."

Here's a bit of the actual law from Classic Liberalism (which has a good clip of Sheriff Joe A slapping Sharpton around (verbally of course):

Maggie's Notebook has AZ Governor Jan Brewer explaining the horror Arizona currently has by living with 400,000 ILLEGAL aliens in their state: "Every U.S. president is charged with the same prime responsibility: keep America safe. Instead, every president after Reagan has allowed open borders to increase to boost their voting base. Every one of those presidents should have been impeached. " 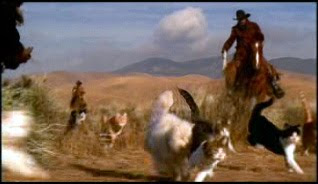 Feds are just trying to herd cats... and pretend they care...
Lame Cherry suggests the Obumbles regime desparately wants to keep their Mexican slaves and asks "Do you think that Mexicans are going to be able to retire in America on Social Security? No way Jose, as this cartel fully intends to work these Mexican slaves to death and in a few years they will raise retirement ages to 75 years. That is how NeoProgs balance the massive debts.They steal from Mexican illegals, give them amnesty so they have to pay off the Obama debt and not flee back to Mexico, and then kill them off in Obama rationed death."

A wise commenter from Reason.com on this topic states "Nothing says liberty like inconsistent enforcement of laws".

Labels: Illegal is not a race, Truth