Arizona draws GRANDE line in the sand about illegal aliens 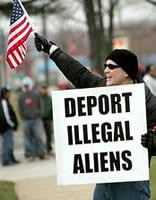 What don't people get about the word "ILLEGAL"? Doesn't EVERY country have its own IMMIGRATION LAW? Well, yes, they DO! Illegal aliens are NOT immigrants!

They do NOT HAVE "RIGHTS": THEY.ARE.ILLEGAL.
Arizona has taken steps to enforce their border with Mexico and try to get rid of some of their illegal alienas. IT.IS.ABOUT.DAMN.TIME.

From The Examiner: "Arizona is known to be the main entry point for illegal aliens, and this has been a thorn in their side for decades. Some say it stands to reason to also be a main entry point for drugs, but California and Texas seem to be running neck and neck for that prize.

Local authorities have finally had enough. A new bill will help to control illegal immigration, and it gives sweeping new local powers to determine a person's legal status. Traditionally, this has been the domain of Federal authorities, but since little or nothing has been done, Arizona is taking the "bull by the horns". " 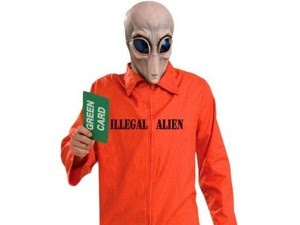 From AZ Central: "The vote also was watched closely on the national stage, where there was widespread agreement the bill would put Arizona on the verge of being the national leader in tough immigration policy.

Currently, immigration offenses are violations of federal law, something most local law-enforcement agencies cannot enforce. The Arizona bill would require anyone whom police suspect of being in the country illegally to produce "an alien registration document," such as a green card, or be charged with a Class 1 misdemeanor and pay a minimum $500 fine.

"I think there is overwhelming evidence that Arizona has the most muscular immigration enforcement in the nation," said Steven Camarota, research director at the Center for Immigration Studies, a group in Washington, D.C., that favors policies that force illegal immigrants to leave the country. "


Michelle Malkin has the story with "Arizona acts to restore immigration sanity, open-borders lobby up in arms".

Labels: Fight, Illegal is not a race