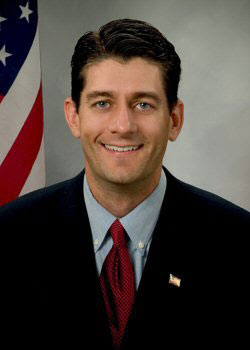 Congressman Paul Ryan (R-WI) is awesome. His insightful words, tenacity, smarts, courage and leadership in these dark days of America is the kind of leadership America needs.
Stating he is "one of the most articulate, intelligent conservative voices in Washington, DC. ", Red State thinks Mr. Ryan speaks wise words of a man who should be president:

"His voting record is impeccable. His performance in the so-called “Health Care Summit” was superb. And this past week, Congressman Ryan delivered an absolutely stunning speech to the Oklahoma Council of Public Affairs. This is not your normal, run-of-the-mill talk. This address made Barack Obama sound like a seventh-grade speech student. "

Too early to pick America's next president? Well, Mr. Ryan may go down that road some day if not 2012 perhaps 2016. First, we have to save America so there will be future elections!
From Real Clear Politics Mr. Ryan discusses repealing and replacing O-scare:
"Self-government stands or falls on integrity, not only in those who represent you but in the enactment of law. This indecency soiled our freedom and embarrassed the democracy we promote in other nations. And this may not be the last of it. To enact its transformative agenda, this leadership employs the Machiavellian saying that the end justifies the means. America was born in a revolution against that whole idea. Soon it will be the norm.

The Constitution and the consent of the people are all that stand between limited and unlimited government power. Zealous ideologues with the best of intentions brush aside the limits on power in order to get whatever they believe is good for the people ... no matter what the people believe. Our system of freedom can survive an assault, but it won't survive if the people are frightened, or angry, or asleep at the switch. A great Democrat, President Andrew Jackson, once said: "eternal vigilance by the people is the price of liberty." We can thank our current leaders at least for this: they have awakened the nation to the danger of taking self-government for granted.

Congress is not only enacting a social welfare state agenda over the objections of the people. It is failing to address the problems that threaten to engulf our country, principally economic decline and entitlement-driven debt crisis. The coming election will be a referendum on the agenda of our current leadership. Either it will give them a mandate that says "more of the same," or it will end the abuse of power and put America back on the path of growth and freedom.

Supposing the American people use their referendum in November to elect a new majority, what would the next Congress do?

The first order of business will be "repeal and replace." We will work to repeal federalized Health Care and replace it with a robust, competitive open market in health care that puts patients and their doctors at the center - not employers, not insurers, and not government agents. This takes at least two elections, and we must show our perseverance.

A new Congress will then turn to the great problem of our stagnant economy and the debt tsunami bearing down on us. The days of pretending not to notice are over. The next Congress will understand this threat and act after transparent deliberation and real debate."
Posted by Lisa G in NZ at 8:38 PM