One of my Facebook friends named Allison advised she was heading off to the April 15th tax day TEA party rally at Daley Plaza in Chicago. I told her: cool, be a citizen reporter and let us know how it goes! These are a few of Allison's pix. 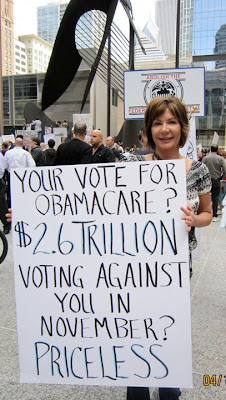 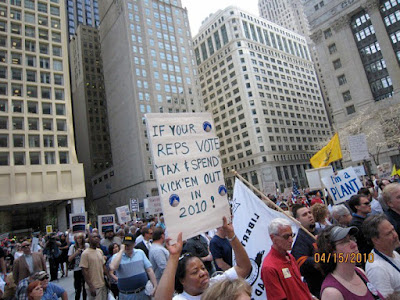 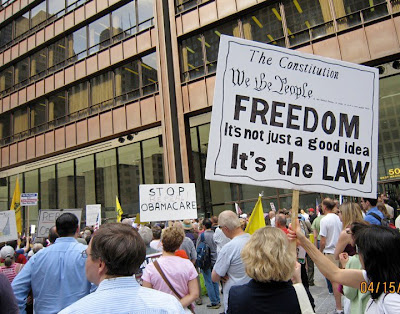 the constitution IS the law, now it needs enforcement 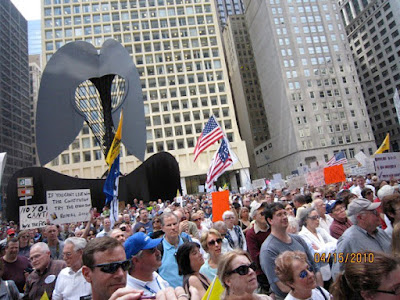 a few of the good people of CHICAGO rally in Daley plaza
... unhappy with over spending by several of "their" leaders...?
... things that make you go "hmmmmm" "mmm" "mmmm" 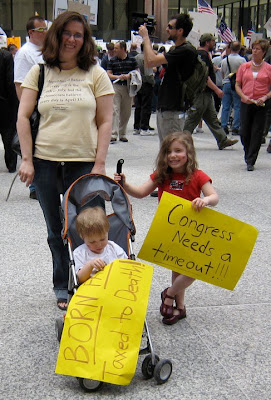 besides being CUTE, this little girl is CORRECT!

Great pix, Allison - you are a star citizen reporter!
More pix from Daley Plaza at Backyard Conservative :)
So also, on a side note; how are those "coffee parties" going you might ask? Well, "I hate the media" reports one recent "rally" had a whopping 7 people. Wow. Can anyone say de-caf?
And OF COURSE, I will never forgot Rick Santelli's AWESOME rant on the floor of the Chicago Mercantile Exchange (my old employer for 8 awesome years: great times at the CME!). Chicago Ray (and at Big Journalism) discusses Mr. Santelli's RANT that sparked the TEA parties last Feb 2009. Thanks Rick - love ya!
Commentor "Tressa" at Big Journalism sums it up with "Little did he (Rick) know that his shout out lauched a grassroots movement that makes the Dems have nightmares...The tea party movement has brought Americans out of their long sleep and now a sleeping giant has awakened...Pandora's Box has been opened, and you know this movement is a success because when the liberal MSM and liberal representatives of our government disparage the movement, you know you are feared and you have arrived... Good Luck Tea Party Movement... Nov 2010 is right around the corner when we take our country back from the brink... " Good on ya Tressa
... also...
The B-Cast at Breitbart and the Media Research Center's Rich Noyes discuss his latest report -- "TV's Tea Party Travesty: How ABC, CBS and NBC Have Dismissed and Disparaged the Tea Party Movement." In 2009, these networks did COMBINED count of 19 stories on TEA parties... not very much, eh?! More shock there, huh.
Posted by Lisa G in NZ at 9:28 PM