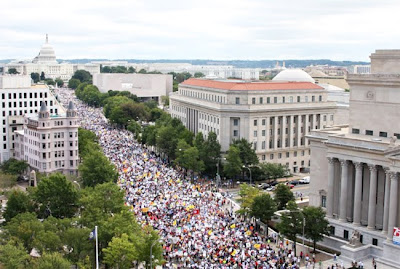 The Sep 12, 2009 rally brought millions to Washington in protest... remember?
I'm sure it was all over the news.
Gird your loins.
Prepare for battle.
Plans are unfolding across America.
MILLIONS WILL PROTEST.
Unhappy Americans coming to a town near you.
On.To.WASHINGTON.
Want to join? GO FOR IT!
Obumbles will probably skip town.
He'll probably be golfing in Hawaii
or a family shopping trip Versaille style in Paris...
of course all on the taxpayers dime.
Read more at WND "Look what's headed for Obama's residence - Millions prepare Tax Day surprise for 'government that won't listen' "
Ryan Heckler, spokesman for the Tea Party Patriots, said a Contract from America will be unveiled all over the nation on April 15. The document emphasizes free-market principles, limited government and individual liberty. Thousands of Americans have been voting for the 10 issues that matter most to them.

The top three issues, as of this report, are:

3. Demand a balanced budget, 69.8 percent
Check out activities at Freedom Works.
Posted by Lisa G in NZ at 7:40 PM