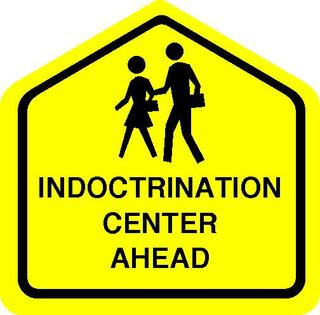 Daniel Greenfield points out the UN is working hard at indoctrinating American children.  Here is the schedule!

From Teaching Your Child to be a Dictator’s Lackey:


"Imagine your child’s school teaching him how wonderful dictatorships are by having him and his friends model their very own group of dictatorships as part of their education. Like so many other Orwellian nightmares in the American educational system, this one is very real and takes place through the Model UN program.

The Model UN program teaches American students that global government is better than national government and that the corrupt kleptocracy on Turtle Bay is the ideal state of mankind. Finally it trains them to put American presidents on trial for violating United Nations laws.

Twenty-two Model UN events are scheduled to take place in November alone and many more are set to follow month after month throughout the school year as the advocates of global government exploit the school system to indoctrinate a new generation in their roles as servants of the conclave of totalitarian regimes.

The Model UN program teaches students to act out roles as representatives of different UN nations, but its real goal is to teach them to reject American exceptionalism in favor of multilateralism by convincing them that countries vary in interests, not in character, and that the People’s Republic of China and Saudi Arabia are no different than the United States in their legitimacy or their form of government.

The great lie that the United Nations was built on is that the voices of all nations are equally valid, regardless if they are banana republics, brutal Islamic theocracies, Communist tyrannies or nations with free and open elections that offer human rights to all. The United Nations is a democracy, but it is a democracy of dictatorships.
The vast majority of the world’s population lives in the thrall of tyrannies and the Model UN program models the farce that this great collective of the oppressed is legitimately represented by the lackeys of tyrants who speak in their name under the United Nations flag. There are 26 full democracies to 55 authoritarian regimes with the latter outnumbering the former in population three to one. The average UN representative is not representing a people or a nation, he is there as the personal representative of an Assad, a Kim Jong Il​ or a Khaddafi."

Other recent articles from Mr. Greenfield:

"The big lie of Occupy Wall Street begins with its name, it isn't occupying Wall Street, it's occupying the resources of a city with a budget crisis on its hands."

"Every day that OWS continues to operate is another day that the city is under occupation, that its budget is being drained by political parasites with no shame and no red lines. It's time to end the occupation and send the parasites back where they came from."

"Finally after ten years of bitter debates over when the United States is allowed to go to war, what a legitimate war is and how much intelligence, indignation and international approval is required before we go to war, the Obama administration has hand delivered the progressive definition of what a good liberal war is. If we can just analyze and break down the elements of what a good liberal war is, then we can be sure to have the support of the left in any future military campaign.


Bad War: A bad war is fought in response to an attack on the United States, the mass murder of American civilians, an attempted assassination of an American president and attacks on American aircraft.

Good War: A good war is fought on behalf of Islamic interests to the detriment of American interests.

Bad War: A bad war is initiated by the United States which gathers a coalition in support of its course of action.

Good War: A good war is initiated by France which eventually convinces the United States to go along because there’s an election coming up and it’s a chance for its failed leader to look tough.

Bad War: A bad war is a unilateral action fought by a coalition of 48 countries without United Nations approval."