Read our lips: we do not want amnesty

That is the last line of a good article over at American Thinker today by Karin McQuillan.

"President Bush let down his base by spending money like a drunken sailor. They stayed home.

Obama lost Democrat voters in 2012, but he won anyway because an estimated 6 million white voters stayed home compared to 2008. Who were these election drop-outs? Rural, working class Republicans. What issues did these voters care about? They are deficit hawks, and want to see government spending come under control - not a swelling of the welfare state to support illegals. They hate illegal immigration. They want good education and a solvent Medicare system. They want to feel listened to by their own party. And they will not vote for a party that betrays them, no matter how awful the other side is.

The Democrats want "comprehensive" immigration reform because it legalizes eleven (or is it twenty?) millionillegals, brings in their families and on top of that, doubles the number of legal immigrants. Plus the CBO says 75% of illegal immigration would continue. This will create a record number of foreign-born legals and illegals, mostly Spanish-speaking, mostly third world, mostly a net drain on taxpayers. We are talking about an estimated 56 million people within a decade. According to the Center for Immigration studies, "There has never been a period in American history when the foreign-born share grew this fast."

The immigration bill will permanently wipe away America as we know it. Democrats believe this will mean a permanent voting majority for their big government welfare state. They are right. We will become Republicans' worst nightmare: a nanny state with a permanent Democrat majority who feel entitled to live on taxpaying families.

Hopes for a good economic future for America's blacks and working class will be sunk, as they are forced to compete for low wage jobs. Hopes for constitutionally limited government will be sunk, as we get an unassimilated influx of third world people who do not understand our republic and the principals for which it stands." 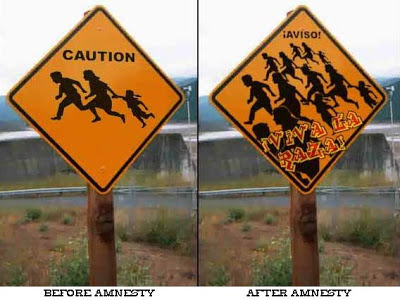 I have NOTHING against Mexicans or other Latin American people.  There is Spanish blood in my own family:  nieces and a nephew who are Irish-Peruvian.

I love Mexican food, Latin American people are hard working - and many are Catholic and family oriented.  I have NO problem with LEGAL immigrants from South America, Mexico or Spain (etc.)

I, and millions of other center-right Americans, only have a problem with ILLEGAL immigrants - and the OPEN BORDER policies/plans of the current Dino-Rino regimists.

Its NOT just Democrat-communists; it is traitorous Republicans also like Marco Rubio and the "gang of 8".

America MUST secure the borders FIRST and THEN fix up their immigration policies.  It is as SIMPLE as that - and it CAN be simple: check out Greta Van Susteren's 1 page plan here from Gretawire. (see?)

As Karin mentions in her article, from May 2013; Heritage advises what the The Fiscal Cost of Unlawful Immigrants and Amnesty to the U.S. Taxpayer will be:

"Executive Summary Unlawful immigration and amnesty for current unlawful immigrants can pose large fiscal costs for U.S. taxpayers. Government provides four types of benefits and services that are relevant to this issue:
"The typical unlawful immigrant is 34 years old. After amnesty, this individual will receive government benefits, on average, for 50 years. Restricting access to benefits for the first 13 years after amnesty therefore has only a marginal impact on long-term costs.

If amnesty is enacted, the average adult unlawful immigrant would receive $592,000 more in government benefits over the course of his remaining lifetime than he would pay in taxes."

There is a lot more at Heritage, here's their conclusion:

"The United States offers enormous economic opportunities and societal benefits. Countless more people would immigrate to the U.S. if they had the opportunity. Given this context, the U.S. must be selective in its immigration policy. Policymakers must ensure that the interaction of welfare and other financial transfer programs with immigration does not expand the fiscally dependent population, thereby imposing large costs on American society.

Current immigration policies with respect to both lawful and unlawful immigration encourage the entry of a disproportionate number of poorly educated immigrants into the U.S. As these low-skill immigrants (both lawful and unlawful) take up residence, they impose a substantial tax burden on U.S. taxpayers. The benefits received by unlawful and low-skill immigrant households exceed taxes paid at each age level; at no point do these households pay more in taxes than they receive in benefits.

What will happen to her if the House of Representatives does decide to hear and pass the horrible gang of 8" immigration bill?

The end of America is what happens.  That is path ol' Rubio and his buds have the USA on right now? Pure crap, it Grants Amnesty Without Closed Border!
Posted by Lisa G in NZ at 2:56 PM

Labels: Illegal is not a race, Responsibility