Two books for the America haters like Haruhi Suzumiya who recently commented on a November 26, 2011 post of mine about communism:  Haruhi thinks more people die under capitalism.

WHAT?  Hey HARUHI and others who think capitalism is "bad".

To understand American history, start with The 5000 Year Leap or The Making of America.

To understand economics - try a little Milton Friedman Capitalism and Freedom or Free to Choose which one reviewer says "Free to Choose" (1980) is a great companion to Friedman's ten hour video presentation by the same name that appeared on PBS in the early eighties to rave reviews and some of the highest ratings in PBS history. The video series was extremely well done and taken right from this book. Friedman explains how and why markets work, why minimum wage statutes hurt instead of help unskilled labor (they price entry level or "training positions" out of the market) and why the Great Depression happened (protectionist tariffs like Smoot-Hawley devastating trade between nations was the primary reason).

Like Hayek and von Mises before him, Friedman explodes the Keynesian mythology that government spending is actually good for the economy. Moreover, this book is written for the layman. You don't need a PhD in economics or a Nobel Prize (both of which Professor Friedman has) to understand this work. It is clear, concise and cogently written.

If you want to understand why the market is ineluctable, this is a must read...and if you get the chance, I highly recommend the companion video series - some of the best work done on explaining why the free market works and planned/controlled economies fail.

It as timely today (despite the dated references) because the free market still works (it always will) and command/controlled economies always fail...this book tells why."

Hope this post can be the start of clearing your brain of some of the cobwebs of Leftist college teaching.  You have been indoctrinated by Leftism - I can tell.  Try to SNAP out of it.

WAKEY WAKEYYYYYY...   From The Making of America: 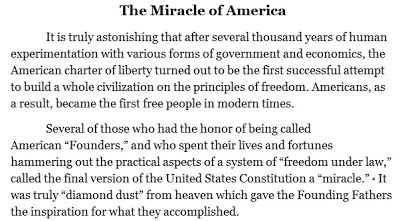 Labels: I love capitalism, why America is great