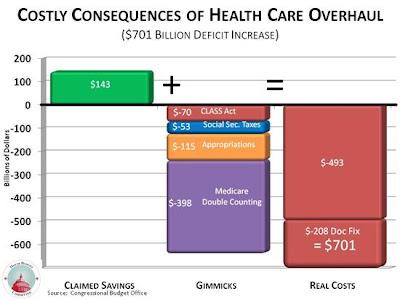 Yes I call the freedom-killing, over-expensive monstrosity called "Obama care" (or the health care "bill") Oscare. Because it is scary and MUST be repealed. The new Republican leaders in the House are voting to do JUST that.
Americans did NOT WANT THIS BILL last year and they STILL do NOT want it.
NiceDeb, Gateway Pundit (and Paul Ryan) explain the CBO only "scores" the proposed budget/bill numbers it is given: CBO NOW says "Repealing Obamacare Will Save USA $540 Billion".

“The Democrats' health care law is a budget buster. Misleading claims on its deficit impact exclude the $115 billion needed to implement the law and over $500 billion in double-counting Social Security payroll taxes, CLASS Act premiums, and Medicare reductions. The law was written to measure 10 years of tax increases to offset 6 years of new spending. The Democrats stripped costly provisions that were included in initial score, and enacted them separately to add hundreds of billions of dollars to the deficit. Hiding spending does not reduce spending. There is no question that the creation of a trillion dollar open-ended entitlement is a fiscal train wreck."

“To be clear, our dispute is not with the hard-working, non-partisan professionals at the Congressional Budget Office. CBO scores what is put in front of them - and what Democrats put in front of them last year was legislation packed with smoke and mirrors to hide the impact of trillions of dollars in new spending."

“Unless repealed, this law exacerbates the spiraling cost of health care, explodes our deficit and debt, and will forever alter the relationship between the government and the American people. I look forward to voting for the repeal of this law and continuing to advance fiscally responsible, patient-centered reforms.”
You go Chairman Ryan, America is with you! More details at House of Representatives Committee on the budget.
Posted by Lisa G in NZ at 4:57 PM