"Why The Left Can Be Violent Morons And Destroy Stuff And You Can’t " The below poster outlines the gobbledy gook shite from the 1960s now being FORCED ON TO THE USA by Leftist oligarchs!

The original text can be read (if you can stomach it - it really is sheer leftist nonsense): here. 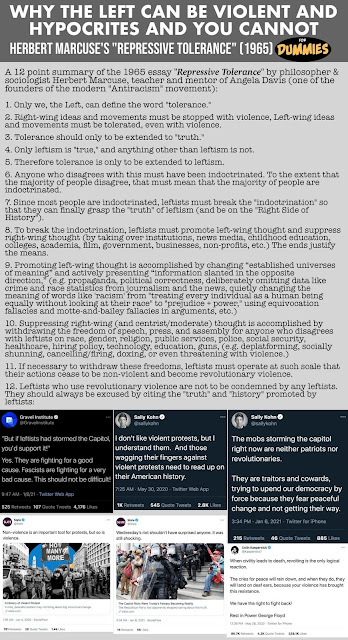 Comment from "WhiteBoard" describes the current NARRATIVE WAR. And what IS the left's goal?

"Beat people’s minds and feet causing them to surrender to rape and pillage.

2) Antifa and BLM have been arrested for the capitol raid – Fact.

4) Raid started prior to POTUS ending his speech – FACT

If you do not lose the narrative war – we can move this wave to where no one TRUST THE SYSTEM and BIDEN IS FORCED TO AUDIT THE BALLOT.

If you let PR FIRMS “change your mind” to we are violent and deserve to be beaten, and “without you knowing” you are just repeating this narrative for no reason – YOU WILL DIE IN some form being berated – and made less them human for targeted abused.

They took an incident (capitol event) and smeared it over 75 million people. Thats a technique you use only to kill your enemy."

And what is the TRUTH about the "storming the Capitol"?  From American Thinker:

"Thomas P. Smith accounted on AT what it was like being part of the masses in D.C. on Jan. 6.   He described an exhilarating experience being among patriots in a historic context.  The crowds were well behaved, respectful, and not destructive in any way, according to what he witnessed.  He started toward the Capitol before Trump finished speaking and calculated he had gotten within about 300 yards of the Capitol when HE saw and heard the beginnings of what was later called a riot.  He remarked there was no way those rioters could have gotten there from the Trump speech before he did.  They had to have been stationed there before the rally began.  His eyewitness account puts a lie to the impeachment charge by itself; the rioters never heard the words Trump supposedly used to incite his insurrection.  The rioters were pre-positioned, WERE uncharacteristic of Trump-supporters, and walked into the Capitol when police opened the doors.  And there had been FBI warnings of planned actions.

Nothing excuses the violence that day, but responsibility for that violence rests quite possibly on Antifa, not on Trump or his supporters."