The Left: obfuscating for Islam

The leftist media is asking "why would those Boston bombers do such a horrible thing?" 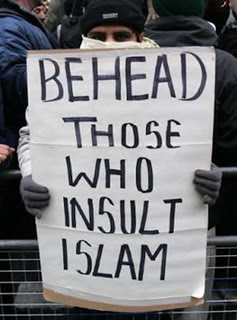 I used to think there were no dumb questions, but that "question" really is dumb, completely disingenuous and hypocritical.  They either just don't care - are doing their damndest to NOT see the answer right in front of their face.  Their propaganda: annoying and tiresome.

The answer is CRYSTAL CLEAR to anyone who has done even a smallest, teeniest amount of research on Islam.  Muslims who commit terrorist acts are following Islamic Jihad - they are simply following what their "religious" book TELLS them to do:  kill all infidels.  Mohammad commands it.

So "true believers" of Islam - are all supposed to KILL non believers.  THAT is why they do it.

Leftist media and leftist "leaders" are purposefully obfuscating for Islam.

Jihad against the USA, the west, has been going on for centuries. 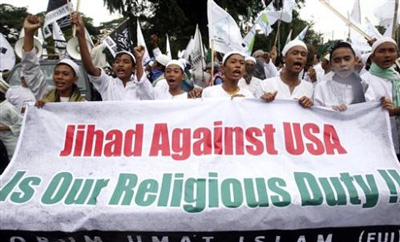 Fox news has done a relatively good job especially when the hunt for the #ChechenJoker was full on after Sean Collier got shot, the car chase and death of Tamarlan - but I heard someone on Fox say the Boston marathon bombing was "the first terror attack in 12 years" meaning first since Sept 11, 2001 - WHAT??  This has NOT the first in 12 years in the USA - not in the slightest.

"BROOKLYN BRIDGE Iyman Faris, a U.S.-based, al Qaeda operative, planned to cut the bridge's support cables but was deterred, in part, by the NYPD's 24-hour coverage of the bridge. Faris sent al Qaeda leaders a coded message that, "the weather is too hot," indicating he could not carry out the mission. He was arrested in 2003, pleaded guilty and sentenced to federal prison.

SUBWAY CYANIDE - A plot to disperse cyanide gas in the subway system was called off at the last minute by Iyman Zawahiri for what he said was "something bigger."

GARMENT DISTRICT PLOT The NYPD and FBI arrested Uzair Paracha for material support of terrorism in New York based on intelligence developed overseas. Paracha is reported to have discussed with top al Qaeda leaders the prospect of smuggling weapons and explosives possibly even a nuclear device into Manhattan's Garment District through his father's import-export business.

HERALD SQUARE SUBWAY STATION An NYPD undercover officer helped disrupt a 2004 plot to bomb the Herald Square subway station by lone-wolf admirers of Al Qaeda. Shahawar Matin Siraj and James Elshafay conspired to blow up the 34th Street subway station, including surveilling the subway station, choosing the location for their bombs, and diagramming entrances and exits.

PATH TRAIN and WTC RETAINING WALL A multi-agency investigation disrupted a plot to attack NYC's underground transit link with New Jersey in 2006. Law enforcement monitoring international chat rooms discovered suspects' plan to destroy a PATH train tunnel and the retaining wall at Ground Zero, to flood the New York Financial District. The main operative was taken into custody in Lebanon and admitted to plotting the attack." ... And: MORE HERE.

Just because the lying liars of the communist O-regime and their apparatchik's "the media" say "terrorism by Jihad" is not happening against the USA or the west, does not mean IT IS.

Islamic Jihad IS happening, has BEEN happening and CONTINUES to happen. Ignoring, being nice nice and coddling Islam - DOES NOT prevent their Jihad.  WAKE UP!

Daniel Greenfield points out Americans might want to refuse to be terrorized, but their government "leaders" sure aren't taking the appropriate steps in prevention:

"If America had refused to be terrorized, the Tsarnaevs would not have been admitted to this country or would have been shown the door once they started adding terrorist videos to their playlist. Instead Tamerlan Tsarnaev was free to slap around his girlfriend while his brother Dzhokhar was adding classic hits to his YouTube playlist like "We Will Dedicate Our Lives to the Jihad."

"(O and leftist leaders) Talk of refusing to be terrorized smacks of governments handing out coping mechanisms for preventable acts of terror. And once we start going down that road, it's worth remembering that the timeless coping mechanism for that sort of thing is Stockholm Syndrome. Indeed the old Stockholm cure is popular in the media which is already beginning to disgorge explanations of alienation that will show that Tamerlan Tsarnaev and Dzhokhar Tsarnaev didn't kill on their own, we made them killers by not showing them enough love.

Refusing to be terrorized is as simple as refusing to accept more immigrants from Muslim countries. It's not the least repressive measure ever, but it beats interfering with the civil rights of hundreds of millions of Americans who are not members of terrorist groups.

There is no need for Obama to play Therapist-in-Chief. It's not his job, even if he is better at it than he is at his real job. His job isn't to praise the attitudes of the people his administration put in danger by refusing to give Tamerlan the boot even after warnings had come in that he was involved with Islamic terrorism. It's to refuse to accept the presence of terrorists in this country.

Obama obviously won't do that job. But neither did Bush. Unlike empty paeans to courage by politicians with none of their own, that topic is not even on the table. The terrorists will keep on coming and after each new act of terror, the politicians who keep the door wide open for them will praise the indomitable spirit of whichever city got targeted this time around." 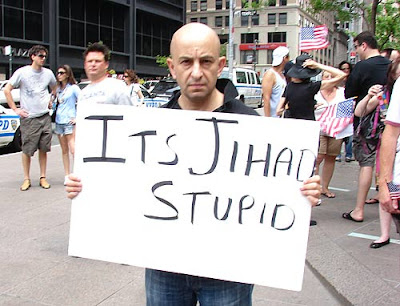