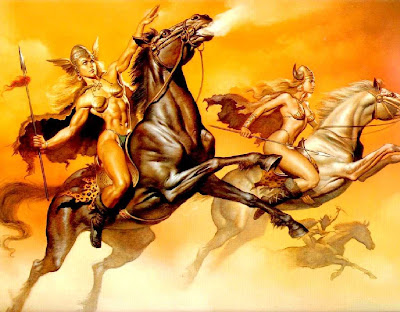 be a Valkyrie instead
be a warrior FOR women and not for subjugation
The old term "feminist" has lost its more noble earlier thoughts and has been hijacked by a bunch of leftists.
From Lori Ziganto's Tina Brown Says “Wingnut” Women Blow To Feminism. I say, What Feminism? "The leftist agenda, which is the femisogynist agenda, is harmful to all – men and women – but has been particularly harmful to women in one aspect. The pushing of the abortion agenda has done more to harm women and motherhood than anything in recent history. The entire pro-abortion movement has demeaned women by diminishing motherhood to the point that it is considered a punishment and a detriment and that a life itself can be an expendable inconvenience."
So what is a Femisogynist? More from Lori Z's Leftist Feminists Proudly Embrace Sluthood, Objectification and Subjugation of Women: "Feminists should really be called Femisogynists. Their agenda is purely a political one and it’s one that is actually harmful to women. The end now justifies the means to the point that the new in thing to do in Leftist Feminist/Femisogynist circles is to “embrace sluthood”. No, really."
What the h*ll? Where did these old feminists lose the plot? Here are specific reasons, from Cassie Fiano's 8 Ways Fascist Feminists Are Ruining America’s Women:

Cassie explains: "American women have some of the best lives in the world. We can literally do whatever we want. American women can go to school where we want, we can go to college, we can work wherever we want, we can marry whoever we want, and we can choose to lead whatever kind of life we want to lead. Millions of women in oppressed countries around the world cannot even imagine the freedom that American women so enjoy — and take for granted. We’ve come a long way in less than one hundred short years, but a lot of women can’t see that.
We’re constantly told that we’re victims of an invisible patriarchy, that we’re slaves to our hormones, that without abortion on demand we can’t fully be women, that we don’t need a man but we need the government. The people that tell women these lies are the same people who pretend to be fighting for us, who have hijacked feminism: the fascist feminists ("Femisogynists!").
Whereas once feminists fought for equality, today the femisogynists fight for things like taxpayer funded abortion and universal health care. They fight for women to be able to sleep around like men and ignore the consequences. And most of the time, women don’t even know they’re being manipulated and lied to. Thankfully, once the lies are exposed, it’s easy to see the con."
Go away you old facist feminists. There are new warrior women in town who will fight FOR women instead of against them.
Posted by Lisa G in NZ at 1:06 PM