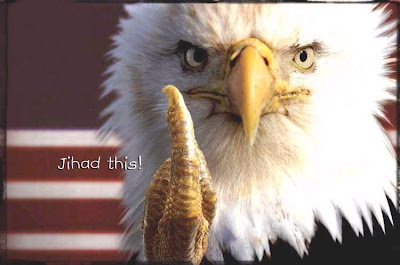 I've blogged about this before. Sharia is shite. The GZM imam is a bad dude who wants the bad type of islam to take over America.
Americans are discussing it and standing up... finally.
Nope.Don't.Want Shariah shite and a GZM will not be built.

From Nov 2009 Jihad Watch:
An Armenian who had embraced Islamism [i.e., Islam] had returned to his former faith. For his apostasy he was condemned to death according to the Mohammedan law.
From Nov 2009 National Review:
"Even in that purely mythical paragon of Islamic ecumenism, Andalusia, Charles Emmanuel Dufourcq, a pre-eminent scholar of Muslim Spain, observed that the myriad religious and legal discriminations suffered by non-Muslim dhimmis (i.e., the non-Muslim Iberian populations vanquished by jihad, and governed by Islamic law, Shari’a), included lethal punishments for “blaspheming” the Muslim prophet, or the Koran: “[For] having insulted the Prophet or blasphemed against the Word of God (i.e., The Koran)-dhimmis were executed.” "

You insult Mohammad, you die (NO CARTOONS ALLOWED!)
Here is the fun list of again of WHY America will not bow to Shariah...
From Stop Shariah Now:

Examples of Shariah Law include the following: (from the authoritative source Reliance of the Traveller, The Sacred Manual of Islamic Law)

1.Requirement of women to obtain permission from husbands for daily freedoms;
2.Beating of disobedient woman and girls;
3.Execution of homosexuals;
4.Engagement of polygamy and forced child marriages;
5.Requirement of the testimony of four male witnesses to prove rape;
6.Stoning of adulteresses;
7.Lashing of adulterers;
8.Amputation of body for criminal offenses;
9.Female genital mutilation;
10.Capital punishment for those who slander or insult Islam;
11.Execution of apostates, or those that leave the religion of Islam
12.Inferior status for all non-Muslims, known as Dhimmitude.
13.Concept of Taquiyya: A Muslim may lie or deceive others to advance the cause of Islam.

Some additional details from the "Religion of Peace (and a whole stack of dead bodies" as discussed recently by iOwnTheWorld:

83,000 persons murdered by Islamic terrorists in just the last 8.5 years.

Put the Numbers in Perspective:

More people are killed by Islamists each year than in all 350 years of the Spanish Inquisition combined.

Islamic terrorists murder more people every day than the Ku Klux Klan has in the last 50 years.
More civilians were killed by Muslim extremists in two hours on September 11th than in the 36 years of sectarian conflict in Northern Ireland.

19 Muslim hijackers killed more innocents in two hours on September 11th than the number of American criminals executed in the last 65 years.
Oh, yeah, & by the way, I hear California is setting to open a Sharia College? (cateogory = WTF?!).
From Logans Warning:

"Not only are US Mosques teaching and preaching Sharia Law, now our government is foolishly allowing a Sharia “college” to open. I say foolishly because Sharia is what the enemy wants to impose on us, and allowing it to be taught here in America, is the equivalent to allowing Nazis to have their own US schools during WWII. Not only do we have to end all Muslim immigration, we also need to ban Sharia Law. Then arrest and deport if possible, any Muslim who calls for Sharia."
Just great
Posted by Lisa G in NZ at 7:29 PM