They are FAR from it.

A recent example from Daily Mail UK features this guy: 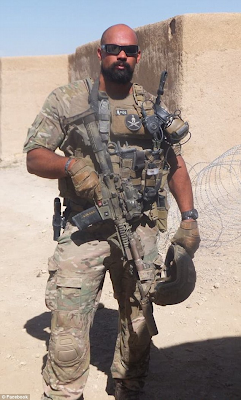 I wouldn't tangle with this guy, would YOU?!?!  He's a USA Army Special forces guy in Afghanistan - and sure looks like one tough mother-f**er.

When he was out on patrol, something caught his eye.  If he was a heartless cruel killer like Hollywood pushes (constantly in LOTS of movies), he wouldn't have batted an eye when he saw what was happening.  This is what he did instead: he RESCUED a helpless being.

With the help of donations and Nowzad (a British dog rescue org): the puppy (Yakkul) he rescued made it out of the hell hole of Afghanistan back home to Valatie, NY.

I'll be praying this brave warrior with a kind heart makes it home safely after his tour(s) finish.

... and Hollywood be damned.