"...the left media, having seen that their campaign of vilification and destruction has only toughened Palin, whilst ensuring her supporters circle the wagons around her ever tighter have finally realized that all their efforts are in vain."

Palin Played The Ali/Foreman Rope A Dope Game With The, Now Exhausted, Leftist Media And Won.Update; Washpo/NYT Hacks Give Up Too:

"Since she appeared seemingly out of nowhere the "Foreman" of the left has rained blow upon blow at her. With her back to the ropes constantly Palin has taken all their best shots and comes bouncing back during each round, or rather news cycle and instead, as previous "champions" have done, hitting the canvas, she unleashes a flurry of blows in return and returns for the next round undaunted.

A fascinating turn of events has now come into play which again mirrors the Ali/Foreman fight. The left has unleashed their most massive series of blows yet, dumping every sort of innuendo tying Palin into the Arizona tragedy-even though there was never a shred of evidence anything she did, or said, had any influence on the shooter. When she rightly defended herself, they parsed her every word and attacked venomously again. But Palin, like Ali, kept talking back at then "I'm not going away" and " I'm not going to shut up".

And, all of a sudden, there are signs of exhaustion on the part of her enemies. They, like Foreman, have seen their best shots having no effect, and like him, they have run out of ideas on what to do next. A perusal of the left wing media now sees comments like "I am sick of reading about Palin" "Why are we discussing her" "I wish she would go away" "I am not going to read anything more about her". Where an article attacking Palin would, a year ago, get thousands of comments attacking her, the number is dropping dramatically. Even the scandal blogs like Gawker or Wonkette or the radical, execrable, leftist blog Daily Kos readers are commenting they are sick of reading even made up scandals about the Palin's.

It is not just the blogosphere where this resignation is taking place. Charles Blow at the New York Times advises he will not write anything further about Palin, Rachel Maddow at MSNBC said she would not discuss Palin in her show, Mika Brzezinski, also on MSNBC glum facedly discussed Palin, clearly under sufferance, and doesn't want to talk about her anymore."

I love this post, too: "Two Years Till Ceremonial Presidency Ends, Then Return To Normalcy Under Palin" ... YES! now THAT is something to look forward to and keep WORKING at to make happen!

Oh, and the many Palin bloggers and supporters are NOT alone in this thought. Check out "Sarah Palin Wins Free Republic 2012 Straw Poll Second Year In A Row With A Stunning 81% Blowout" ... Be forwarned about POLLS and there "results" though: not all polls are "good" or even accurate. Many are bogus: read about what to watch for! 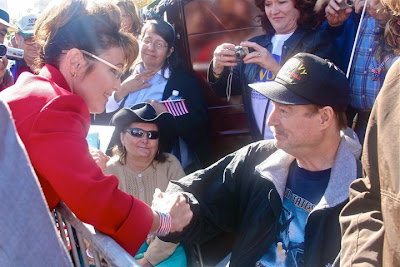